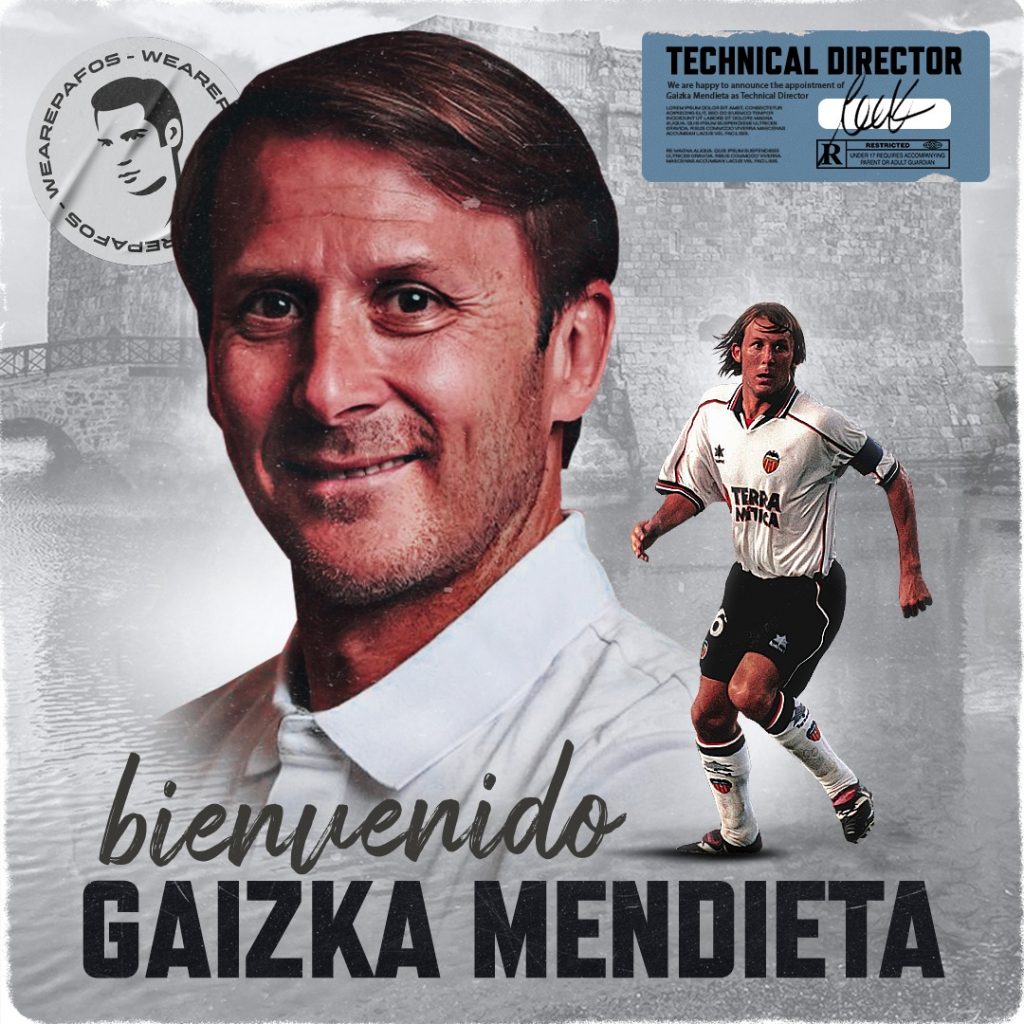 Paphos, Cyprus, August 4th, 2022 – The Club is happy to announce the appointment of Gaizka Mendieta as the new Technical Director.

Gaizka will replace Ivan Mance who left earlier this summer in this position, taking over the overall leadership and responsibility for operations and strategy across all football functions, reinforcing the foundations already in place.~

Gaizka Mendieta is a legendary Spanish former professional footballer who played as a midfielder. A versatile player, with good technique, offensive capabilities and tackling skills, he made his professional debut at just 17 in Segunda División. He later moved to La Liga after signing with Valencia CF, where he spent most of his career. Mendieta has also played for Italian club S.S. Lazio, Spanish FC Barcelona and finished his professional career with Middlesbrough in England.

Over the course of ten seasons, he amassed La Liga totals of 263 games and 48 goals. Mendieta played 40 times for Spain, appearing for the country in one World Cup and one European Championship.

Gaizka Mendieta was one of the best players in the world between 1998 and 2000. He won the Copa del Rey with Valencia during the 1998-99 season, as well as the Spanish Super Cup the season before that. He captained Valencia to Champions League finals in 2000 and 2001, against Real Madrid and Bayern Munich and was named as the UEFA Club Football Awards Best Midfielder in both seasons.

A €47m move to Lazio in 2001 made Mendieta the sixth-most expensive player of all time. Mendieta also helped Middlesbrough to the UEFA Cup final in 2006 and was a UEFA European Under-21 Championship runner-up in 1996.

Since retiring from playing in 2008, Mendieta became a TV football analyst and worked as a pundit on Sky Sports’ UK television coverage of Spanish football. Over the past years, Gaizka has served in several positions at UEFA is also an ambassador for both La Liga and UEFA.

Charis Theocharous: “ We are honoured that Gaizka has accepted the role. His football journey and achievements as the player instil respect and made him an ideal candidate for this position. In his role as a Technical Director, he will oversee all aspects of football department and help build toward future success.”

Gaizka Mendieta: “It is my pleasure to join the club. I am excited about the direction the club is working towards and ambitious goals it has, which is one of the reasons I have decide to take this position. I am ready for this new challenge to bring the club and all it departments to a new European level.”
‹›